A Word On Boston

I'm shaking my head in disbelief as I watch this situation unfolding in Boston... An entire American city on lock down and held hostage behind two young brothers being driven by a spirit of violence!

I'm not only stunned by the fact that it's happening... I'm shocked and astounded that in recent weeks, so many of the prophetic voices and seers in my life, had already seen this unfolding in the spirit realm, but they didn't know exactly when or where it would play out!

We've been in prayer over these words and visions, crying out to God to hold it back and keep the destruction from breaking out! Yet, here we are watching it unfold in the natural, just the way God's warning pressed in on us in the spirit.

When things like this happen... When God reveals a thing, then He allows it to happen, we have to realize that He's not only speaking through the warnings, but through the event itself! The question is, do we have ears to hear what the Lord is saying??? Do we have eyes to see what He's trying to show us???

Many people may say many things... I hear and see God giving us what many in the nation have been crying out for.... The right to pick and choose how we embrace extreme weapons of mass violence with no oversight, no regulations, no questions asked!

People have asked for this.... But now that we've got it, we don't like it!

When we've allowed weapons of mass destruction to be used out of place, out of season and with the wrong motives, it's like ringing a bell that can't be unrung! By securing our rights to freely sell and trade military-grade weapons on the streets and communities of our nation... with disregard of the safety of others... a door has been opened in the spirit realm that's given access to the enemy and he's taken full advantage to work his evil plans!

Whether we realize it or not, a spirit of violence has stepped into our midst and it's using weapons made to produce death, for their intended purpose, but toward the wrong targets! People have demanded the right to possess weapons that should only be used in battle situations and the results of these choices are being manifested right before our eyes... Only it's happening on street corners, in theatres, in mosques, in grocery stores and in elementary classrooms.

I always warn my children that we can't play with the devil because the devil doesn't play fair. If you give him an inch, he'll take your life! And today, we're witnessing the result of the hideous games he plays!

This is a warlike situation in Boston with warlike outcomes... Mass Fear, Mass Death and Mass Destruction... Military-grade equipment, weaponry and tanks on the streets of the city that's known for patriotism and the right to revolt! That very city is now being held in a military state because so many people have revolted against decency, order and the responsibility to be governed. Yes, it's right and proper to protect your own. However, this must be done with moderation, in a balanced and sensible way!

These events are yet another reminder that rights and freedoms come with responsibility and accountability! That love doesn't seek it's own way, but always considers the needs of the greater good! That violence and hatred are works of darkness, straight from the enemy's agenda, which we co-sign on when we refuse to be led my love!

These events are a strong reminder us that Jesus never told us to maim and kill to defend material possessions, but to willingly give it away! He taught us to seek first the kingdom and the Father would give us everything we need, without having to labor, toil or fight to get it or to keep it!

This is a tough, tough lesson for the church, that way of righteousness is not guarded with weapons of mass destruction, because the weapons of our warfare are not carnal, but mighty through God to the pulling down of spiritual strongholds!

When you see all this through the eyes of the spirit, it's clear that when it comes to the issue of gun ownership and second amendment rights, we need some course correction! We've carelessly sown to the wind by endorsing certain elements of violence into areas of our lives that should be protected lands. And now we're reaping the whirlwind of violence, raging back in our faces because the regulations that should be in place, to protect our most innocent, are as out of place as these weapons that are designed to kill and destroy. We want to get outraged by what's happening in the streets of Boston, but God is only giving some of you exactly what you've asked for!

We want Him to close the door on this vicious enemy that's attacked our land, but we have to strongly consider that freedom comes with a price!

Melissa... A Mother In America 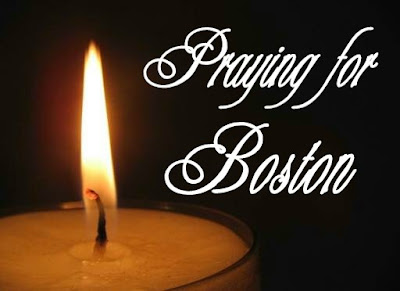