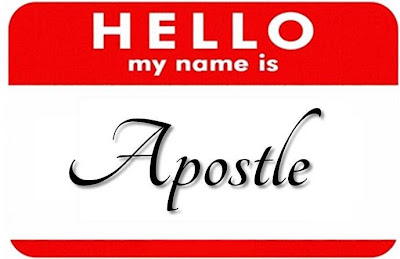 I thought long and hard before I made the change on Facebook in the early hours of the morning... Adding "Apostle" to my name is not a step that I'm taking lightly.  This is actually a  major step in a very long, very intense journey of growth and development, that I've been on for the past three decades.

I accepted the call to apostleship in 1985, in room 305 of Octavia Hall on the campus of Southern University in Baton Rouge, Louisiana. While the Lord Jesus Christ himself, laid His hands on me and placed a heavenly deposit within me that night, it's taken all this time for the Father, the Son, the Holy Spirit, along with an assortment of Angelic Hosts to shape and mold me into the vessel I am today.

It's taken many turns on the potter's wheel, many lessons at the apothecary's table, many hours in the refining fires of God, and plenty of scrubbing and purifying with fullers soap, as I've been washed and cleansed, over and again, by the water of the word of God.

It’s been crazy… It’s been intense, it’s been as painful and crushing as it’s been exciting and joyful… Even so I wouldn’t give nothin’ for my journey!

After much prayer, many confirmations, prophetic declarations, dreams, visions and wise counsel from my spiritual parents and the sheltering trees in my life, the Father has said it's time to make the public declaration concerning my calling and election as an apostle of the Lord Jesus Christ! I accepted the call decades ago and since that time, I've done the work, I've paid the price, I've learned my lessons well and I’ve earned the right to wear the title that really only categorizes the work God uses me to do for His kingdom.

Through my journey, I've grown so close to Father that He's able to move me with a whisper. I'm even more thankful that through the love and intimacy we share, He has shown me how to walk softly before Him, so that He too, is moved by the whispers of my heart! We’ve shared countless conversations at the table He prepared before me, in the presence of my enemy, so I could learn the ways of my Father’s heart, as well as the enemy’s tactics, and most importantly, what it truly means to walk as an Ambassador for Christ!

Trust me when I say, this teaching and training is so essential because this apostolic ministry is nothing to play with! And it's not something to aspire to, as some may think. Having seen it through natural eyes, in 1 Corinthians 12:28, they saw that the "Apostle" was listed first among the gifts and they made that a personal goal to achieve, like climbing the corporate ladder to the corner office of the CEO.

Yet they completely miss that the apostle is a part of the foundation of the church, and they walk as humbly and a lowly as Jesus Himself, who is the chief cornerstone! They miss that the first work in the apostle's life is to be bent, broken, shaped, molded and fashioned into a stone, that's made in the likeness of Jesus, with the same depth, width, height and the consistency and character of Christ.


The stress and the press of that process alone, will crush a man or woman who attempts to approach this gift with fleshly motives!

They miss that everything and everybody in the church rests upon the backs and the shoulders of the apostles and prophets, who must remain meek, gracious and free of offense, even when others look down on them. Truth, mercy and love must be their governing guides, even when others step on their dreams, belittle their vision, ignore their anointing, spit on them with their lies, and then take what they’ve laid for, prayed for and received by revelation, and slap their name on it without even giving God any credit!


They miss that the character has to outweigh the call because when God calls them to get up in the middle of the night, to pray the devil off the backs of those very same haters, He’s not asking for their opinion… only their love, their sacrifice and their obedience!

Being an apostle is not something you're promoted into... It's an identity that’s encoded in your spiritual DNA, from the womb, as the substance of your being is knit together. It’s a lifestyle you're birthed into, by the Father's divine design, as you're handpicked and selected by Jesus Christ Himself. It’s a place you learn to walk and a mantle of responsibility you grow into, as you accept the charge to put others first and lay down your life in service!

It’s a burden of soul that you carry with little recognition, until you’re publicly released into specific kingdom assignments, not of your own choosing. But this release will only fully come, after you've been stripped bare of self, in the scorching heat of the backside of the desert, then cooled by the soothing rain of the Father's tears and clothed in garments of honor, dipped in the blood of the Savior!

Like I said... This thing is nothing to play with!

Now that I've been processed… Bent, stretched and broken, then built up, matured and prepared to carry and flow in this gifting, with accuracy and integrity, the Father is saying that it's time that I wear the title with humility, grace and dignity!

I praise God for elevation, promotion and increase as I take pause to celebrate and acknowledge all that the Father has done in me! Even as I continue to walk softly before the Lord and serve His people, I take up the charge to continue to pour out to others what the Father pours into me! Because at the end of the day, it’s really not about my title or my name, but the effectiveness with which I allow my gifts to be used, to impact the kingdom of God and touch the lives of the people the Father loves!

Please pray for me as I pray for you!