Why Diss Me When You Don't Really Know Me?

Here's an interesting observation I've just discovered when it comes to connecting with new people: 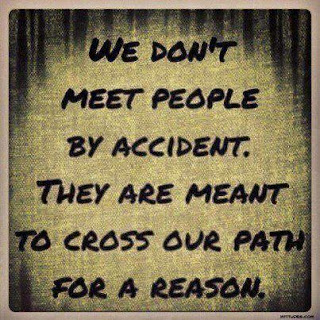 I'm learning that this statement is absolutely true! People do come into our lives for a reason, a season or even a lifetime. However, we really do ourselves a disservice when we choose to disregard a person based on their public persona, without getting to know the real person behind the public face. I recently had this happen to me and it was not a good feeling.

Oddly enough, when I asked the Lord about it, He showed me that I've done the very same thing to others, and it goes something like this...

I see someone's public image and my heart says, "They seem interesting... I like their message, style, flavor, etc. I should reach out and connect."

But then I second guess myself and start to question if I'll be received, respected or even acknowledged. I question their authenticity, their sincerity and I decide they won't want to know me, so I decide to "diss" and I don't initiate the connection. And just like that, my fear of being dissed becomes the justification for me to diss them first! Now, they've done absolutely nothing to me, nevertheless, I'm negatively judging them, unfairly dissing them and I'm blocking what could potentially be a great opportunity!

My fear says, "They probably don't want to be bothered with me... They're out of my league... They're not my type or They're probably a jerk!"

While my head says all that, on a deeper level, I'm actually projecting my insecurities, about myself, onto them and making the assumption that they'll react a certain way, based on my one-sided, misguided, negative perception.

However, when I've pushed past my fears and engaged them anyway, more often than not, it turns out to be a positive connection. Once I get to know the person, I'm pleased to find that their true authentic nature actually meets or exceeds my expectations. And in the end I'm blessed by the interaction. (I'll admit, at times I've been flat out ignored and I've even run into a few jerks along the way. But when I follow the leading of my spirit, I usually get it spot on right!)

Now that I'm realizing my tendency to do this, I can't help wondering how many other great connections I've missed out on because of fear and intimidation?

I may not be able to do much about those missed opportunities, but I can purpose in my heart to do better going forward. And I encourage others to do the same. If we take a minute to get to know each other, before we decide to diss, we could create some really powerful connections that will lift us up as a whole!

Having said that... If you had the urging to reach out to me, but for whatever reason, you decided to diss me instead, I encourage you to push past your concerns and reach out! Trust me... I'm just a chick, doing the best I can, to make it do, what it do!

Now I may be one super awesome chick... (Lol) ... But I'm always open to meeting new people and sharing my life journey with other super awesome people!

Have a blessed one!