Journey to My True Authentic Self - A Continuation....

It's early in the morning... 2:12 am to be exact... I was not planning to write this blog post. I wasn't prepared to tell this part of my story or to embrace this issue that I've been avoiding for the last nine months. Yet as I've mentioned in previous posts, Father God has decided that 2013 is the year that I am to come face to face with my true authentic self!

No more hiding behind a false persona...
No more accepting lies that inadequately veil truths that I haven't wanted to face...
Yes... The anointed Apostle has been known to believe a pretty lie rather than embrace the ugly truth about myself.

Even so, God has a way of drilling down deep beyond our fears and excuses, to pull up and expose the raw realities that we feebly try to keep hidden. And believe me... Nothing has been sacred on this journey of discovery! I've been challenged to make peace with my hair, my diet, my identity, my ministry assignments, my gifts and now Father has come after one of the most personal areas in my life.

And this one is tough! It has to do with another piece of my identity that I've been resistant to face, confront, deal with or own. I can't even really explain why I've had such a struggle with this issue... I just know that I've avoided it and in this season in my life, anything that I'm not willing to deal with in an open, honest and healthy way, God is telling me unequivocally, that it cannot remain this way. 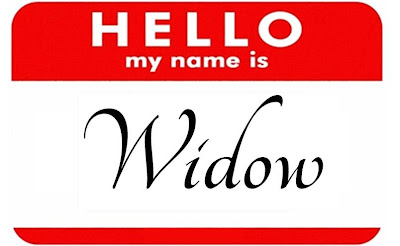 There! I said it! I put it out there for the world to see, even though just about everyone that knows me, knows this about me. But all my friends, family, acquaintances aren't the ones with the issue here... It's me!

I'm the one who hates this word! I hate it's meaning, it's connotation and the reality of this part of my life!

I'm the one that hated watching the man I love slip away from me, a little more each day, for seven long years. And I'm the one who hates that I have to pick up the pieces of my life, and move forward... taking full responsibility for the condition of my finances, my household, my children's future and the rest of my life, AND I hate that I have to do this without the man who was supposed to be by my side until we were well into our 80's!

I can honestly say that I've accepted Nick's "graduation to heaven"... Especially since the Holy Spirit interrupted my worship one day in 2011, to tell me that Nick was asking to come home to heaven and Father was going to answer his prayer. That meant I needed to prepare myself and our children to release him. By this time, I'd been walking softly before the Lord long enough to know that it was useless to argue when He spoke in such a clear and definitive way.

Besides, every moment I spent with my beloved, I knew how tired he was becoming. I could see with my eyes what my heart didn't want to accept... Nick was dying and there nothing that could save him except a move of God, and God had already told me that Nick's healing would come as he stepped into glory and not while he was here on earth.

So when the time came, I was ready to let go. Yet even as I went through the process of saying goodbye and making the transition to this new phase of my post-married life, I outright refused to label myself as a widow. In fact, in the last nine months, I've probably only spoken the word three times and that was in a response to a direct question by someone in an official capacity. (Social Security, Medical Report, etc).

Since I didn't want to wear that label, I referred to myself as "no longer married", "Single" or I'd tell people, "I'm still married, but my husband's not with me right now because he graduated to heaven."

Whichever one of those pseudo-truths lies I told, I may have been grinning on the outside, but I was cringing on the inside. In reality, I was not comfortable with that part of my identity and I was trying to hide that pain. No matter how many witty comments or funny quips I tossed about, I needed to face and accept the truth of who I am... a widow.

My husband died and left me a widow.... A WIDOW!!! A Widow with Five Kids, to be exact!

Interestingly enough, there's a reason I'm confronting this issue right now, in the middle of the night, and it's because of Jordan and Jessica Rice. It seems that there story is EVERYWHERE these days, and I'm really truly happy for them and so blessed by their story. You see, Jessica and Jordan were both married and widowed in their twenties. Jessica became a widow just two months after she and her first husband Jarron got married. I became aware of her story a few years ago through a mutual friend and I've followed her blog as she often wrote about some of the same issues I've faced with my husband's illness and eventual passing.

So when I came across the announcement of her wedding to Jordan Rice, who'd also lost his wife, Danielle, I was struck by the beauty of how God brought these two souls and hearts together. If you haven't watched their video or read their story, please do so using the links I've posted below. I promise... IT WILL BLESS YOU!!!

As I watched the video of their story, (and I watched it several times), I'd always get to this one part and I'd feel this twinge in my heart. It was the part when Jessica says that she may have never responded to Jordan's Facebook friend request except for the fact that his relationship status stated that he was widowed. When she saw that word, widowed, she was intrigued, because she could see that he was a young like her and she knew they shared that in common.

His true authentic declaration had become an open door that brought love into their lives again. As I considered that point, it hit me that if they could be honest with the world, and themselves, about their marital status, what was wrong with me?

Why was I still so hung up on that word that I could not put it on my own Facebook page?
Was I expecting people to look down on me, to pity me or feel bad for me?
Did I forget that My Maker is My Husband and that Jesus is my ever present help in the time of trouble?
Did I forget that He'll never leave me or forsake me?
Did I realize that I could embrace my true authentic identity as a widow because God is not yet finished writing my story and like Jessica and Jordan, there is still the possibility of love in my future?

I realize that this may not matter to anyone but me and God... but if it's a place in my life where I'm not walking in peace, then that's just not good enough for me or my Father! So I'm yet again, stepping out of the shadows of my own heart and embracing the reality of the real me!

Yes, I may be a widow, but that doesn't mean that I have to be sad, broken, pitiful or bitter! Especially when  God is my Father, My Husband, The Lover of My Soul and Dearest of Friends to Me... He is My Everything and He's well able to keep me covered as I journey forward into this new phase of my life!