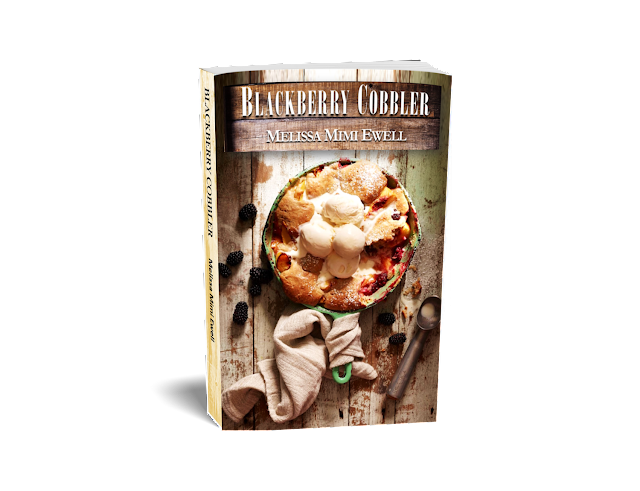 Everybody loves a preview, so here's a bit of my new novel Blackberry Cobbler. Enjoy the forward that gives the back story behind the story! Here we go.....

In my 39th year of life, a strange series of events occurred that forever altered my life.
My paternal grandmother, Irene, who’d been a most beautiful, powerful influence in my life, had just passed away. In the process of writing her obituary, I was looking through her personal papers, when I came upon an old obituary that I recognized was in her handwriting. It was the original obituary she’d written for her paternal grandmother, Easter.

As I read those words, blurred by my tears, I was startled to learn that Grandma Easter had died within days of my birth in June of 1963. That was a piece of my history that I’d never known until that very moment. Totally intrigued, I started comparing the dates, and I was further surprised to learn that the year my great-grandmother Easter died, was also my grandmother Irene’s 39th year of life.

Growing up, I’d heard many stories about my great, great grandmother Easter. She was born in Lee County, Mississippi, the daughter of slaves and a woman with a huge personality. She had endured much hardship and loss in her life, during those post-slavery years and had become a woman of great strength, wisdom, tenacity, and fierceness. It’s been told that she was one hilarious chick, with a wicked sense of humor, who was afraid of nothing and no one. She was an amazing force of life and I’ve often felt cheated that I never had the pleasure of knowing her.

Looking back, I still remember the sense of destiny I felt in that moment, as I was holding that faded paper chronicling Easter’s life story in one hand and the legal pad where I was writing Irene’s story in the other hand. I felt a shudder go through my body, as I realized, that while Grandma Easter and I had never met in life, our souls had passed through the doors of eternity around the same time.

It was such a surreal experience, because just a few days earlier, I’d been laying in bed with Irene, sharing the pillow and holding her hand, as she slipped into glory, where Easter was waiting to welcome her. I imagined my grandmother, saying a tearful goodbye to her grandmother in the same way, thirty-nine years ago… A few days after welcoming me into the world. I felt such a sense of divine recognition imprinted on my soul, as I thought about the passing of these two remarkable women through my life, from one dimension to the next, confirming the divine connection we all shared. Past, Present, Future.

Whew… That was a crazy intense moment. And it gets more intense…

A few days later, as I was looking through a drawer of old family photos, I came across a picture of my paternal great-grandmother, Maime, my grandfather’s mother. On the back of the photo was a scribbled note with her name and the date of her death – February 22nd. Strangely enough, February 22nd was the date of Irene’s recent passing. I was astounded when I realized this unusual occurrence and I suddenly felt the weight of something hit me, causing me to take a step back and I sunk into a nearby chair.

I stared at that date for several minutes, wondering if the women of my past were conspiring to get my attention. It seemed as if they were trying to get me to listen up, to pay attention and not let them get lost in the clutter of old photos and faded letters. It felt like these sisters were speaking, begging me not to forget them and not to let their identities fade away with each passing generation.

They were asking me to not let their strength and their courage be diminished by time, nor for their stories, our collective history as a family pass away with them. They were asking to be remembered, reminding me that their blood, their DNA was in me and that their lives all helped to define mine. They made up various parts of who I am, where I came from and what they had all given me to be successful and fulfill purpose going forward.

I could not escape or deny that message. Nor could I ignore the reality that they were handing me the baton, the responsibility and the assignment to carry their legacy forward. As I let all that sink in, I made the decision, right then, to take up that baton and run with it. Little did I know how soon that commitment would be put to the test.

As if to solidify that something was indeed going on, a letter arrived in the afternoon mail that very day. The letter was addressed to Irene and it was from my cousin’s son. He’d sent her an invitation to his upcoming college graduation. He was also looking for information on how he could connect with his father. He hadn’t heard from his father in several years and he wanted to know if my grandmother had an address where he could send him an invitation as well.

He wrote, that while he did not know this side of his family well, he always appreciated how my grandmother would call from time to time, just to check on him. He thanked her for sending the birthday cards with the little change inside, and how much that meant to him. He said he was always grateful that she kept in touch and he wanted her, and his father, to be present to celebrate this proud achievement in his life.

Tears filled my eyes as I realized that the invitation had come too late for my grandmother to read these heartfelt words. It came too late for her to witness his graduation, which she would have never missed. I was also deeply saddened, as knew his father wouldn’t be there either. My cousin was incarcerated, and I knew that, because I’d just spoken with him a few weeks earlier to give him the sad news of my grandmother’s passing.

It was a tough conversation I had with my cousin, as he tearfully talked about the regrets of his mistakes that were preventing him from being with his family during this time of grief. I could only imagine how hard he would take it, when he learned that those same consequences, would cause him to miss out on yet another important family milestone.

Nevertheless, I knew that I would be there at that graduation. Along with my father, my sister, brothers, and any other family members I could get the word to about this memorable event. I immediately picked up the phone and called my younger cousin to tell him about my grandmother, his father being incarcerated and to confirm that we would be there to celebrate with him. I then went back to that drawer of family photos and I put together a set of photos of his family tree from his father’s side. I framed them and presented it to him as a graduation gift.

Trust me, there was a lot of love and tears, on the day of his graduation as the generations of our family were proudly present and accounted for. Yes, we showed up for that young man that day, so he would experience the support of his family. Past, present and future. Thankfully, my sister is now the one who calls and checks on him from time to time, still maintaining the family bond to this day.

I knew that day, somewhere in the realm of the spirit, my grandmothers, great-grandmothers and all the ancestors before them, were smiling, assured that the family would stay connected and they would not be forgotten. Much of those connections are now taking place via social media, nevertheless, we’re keeping in touch.

Over the years, as I pondered these events, I tried to come up with a meaningful way to keep our family history alive and preserved for future generations. I didn’t just want to tell our family’s personal stories, even though that would be extremely important for us. But I believed it would be much more impactful to share some of the wisdom that our elders gained through their collective life experiences. It felt right to capture that part of our legacy and share those treasures with the world. This is where the concept of Blackberry Cobbler was born.

Although the story of Mama Glory and the Thurman Family is fictional, some of the incidents depicted in this novel were taken from real life, anecdotal stories and factual occurrences that took place in the lives of my family members. In this way, “Blackberry Cobbler” is loosely autobiographical. A story within a story, that’s engaging, entertaining, thought-provoking, poignant and unforgettably life-changing.

When I read through the pages of this novel, I’m hearing the voices of my people, whose words echo in the conversations between Mama Glory and Jax, and between Sylvester’s words and Nina’s pen. I am writing their words and sharing the memories that have been so valuable to the generations of my family. And I know I’m doing my ancestors proud as I’ve written their story for the generations to read, learn from and grow thereby.

In telling this fictional story, based on real life events, I’m taking my place as the connection to the generations of many family - Past, present and future - to make sure the legacy of the past is not lost to future generations.

It’s my hope, that in taking the journey of this story, you’re inspired, and even provoked, to be the link from the past, the present and the future of your family tree.

Believe me… It’s been an awesome experience! Enjoy!